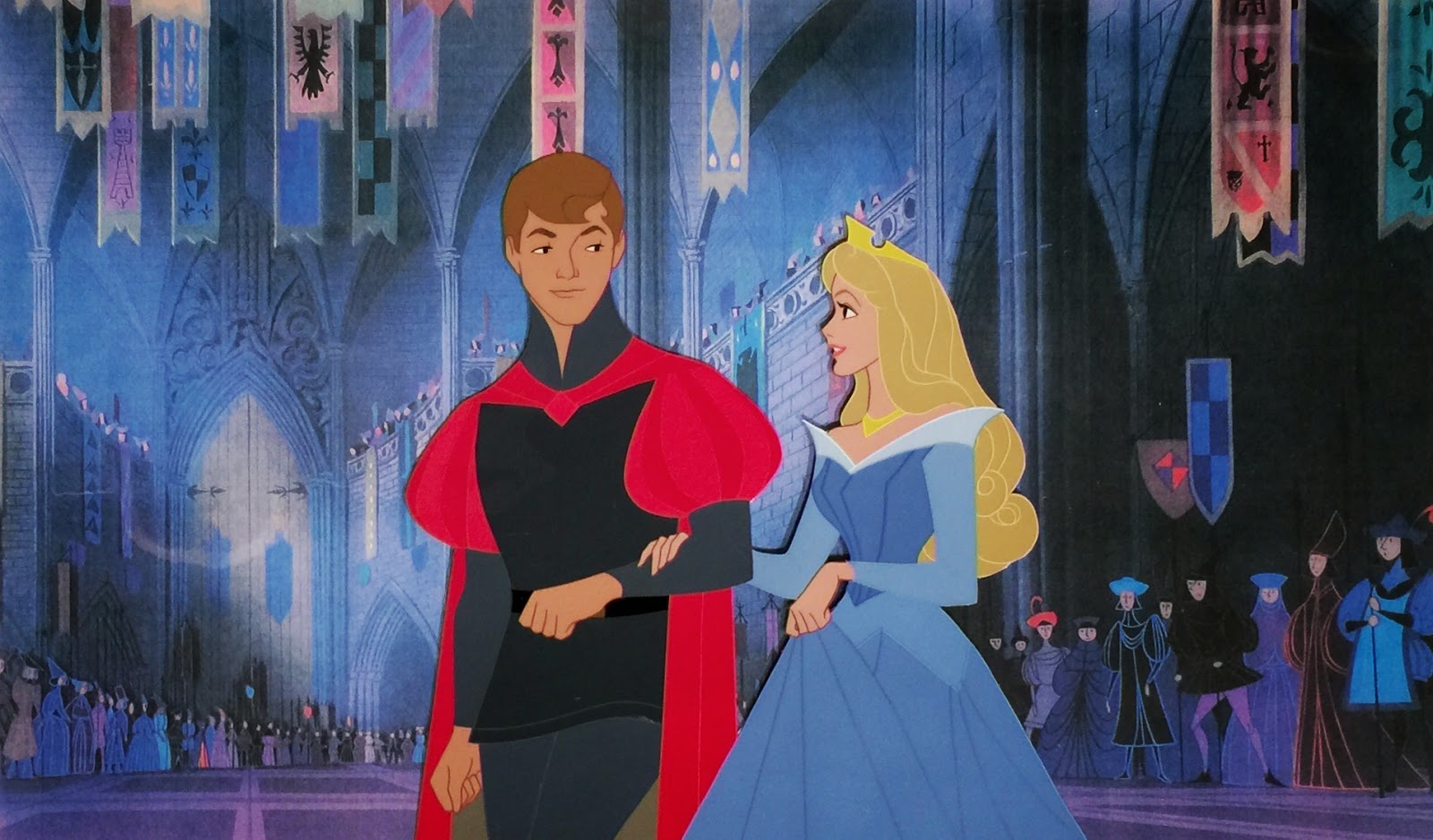 The three great Walt Disney classic films with storybook Prince and Princess endings are: Snow White and the Seven Dwarfs, Cinderella, and Sleeping Beauty.  The dramatic and usually short endings of these films are scenes that the entire world is familiar with, and therefore are some of the most sought after cels and drawings for collectors.  The ending for Sleeping Beauty is just visually stunning; with Prince Phillip dressed in his regal tunic and red cape, and Princess Aurora dressed in her blue ball gown wearing her crown.  There are very few cels and drawings in the open market from these short last few scenes of the film.  The majority are images of the two of them dancing either in the great hall or transitioning into the clouds.  The images are small in size with no detail to the characters and because the characters are rotating in a circle; almost every one of them will be a back shot of either the Prince or of Aurora. 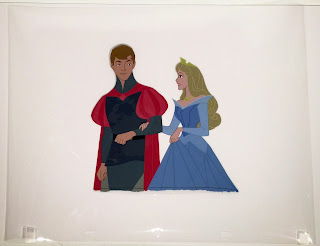 Photograph of the complete cel.

Prince Phillip was animated by Milt Kahl and voiced Bill Shirley and Aurora was animated by Marc Davis (who was also lead animator for Maleficent) and voiced by Mary Costa.  Both Bill and Mary would be live action models for Prince Phillip and Briar Rose/Princess Aurora for the animators, and their chemistry was magical on screen.  In addition, their singing together was one of the many highlights of the film.  As discussed by Andreas Deja, Milt Kahl did not like the job of animating Prince Phillip:

"Some of you might know that Milt absolutely despised working on the prince. During one of our get togethers I asked him, how he could do such a beautiful job on a character he loathes.  To my best recollection he said: 'Well, the character needs to be in the picture, I didn't like the assignment, but you do the best you can.'" 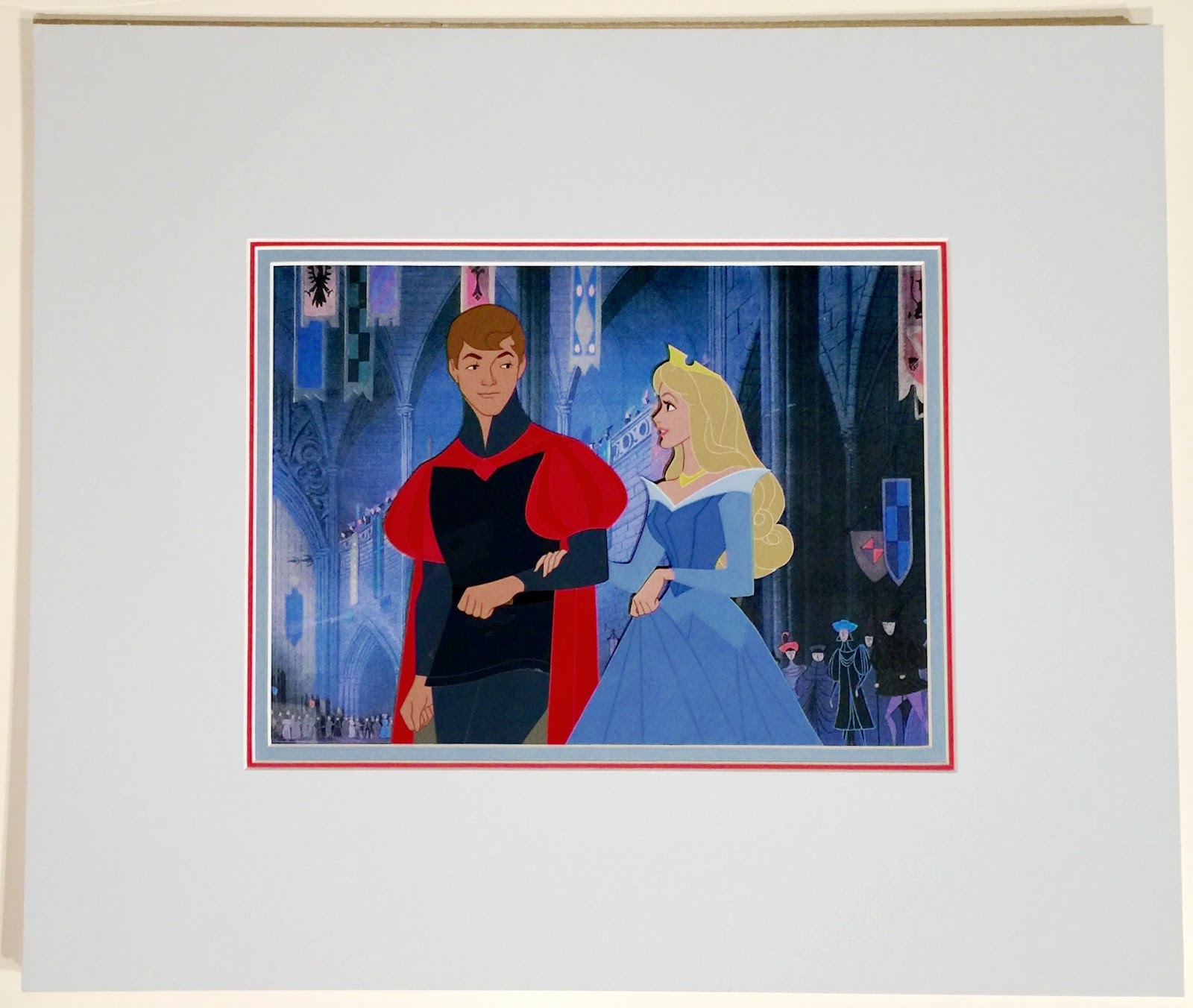 Matted cel.
However, because the cel and background are much larger; the entire work could be both matted and framed much bigger!

The animation of Prince Phillip by Milt Kahl was radically different than prior Princes in other films.  Phillip was an active character; speaking to his horse Sampson and Sampson understanding what he was saying.  Phillip was also seen as a child at the start of the film, had to be animated in more than one outfit, was the first Prince to use weapons against a Villain; and had to speak, interact, and sing with his love interest Princess Aurora/Briar Rose.

The majority of Sleeping Beauty, shows Princess Aurora disguised as Briar Rose living in the forrest with the three fairies: Flora, Fauna, and Merriweather.  When the Walt Disney Company began to promote the theme of Princesses to the public, it was the Princess Aurora character dressed in either the blue or pink dress, that was the preferred form.  For animation collectors, the opportunities to acquire cels or drawings of Princess Aurora are few and far between.  This cel however is one of the greatest I have ever seen!  I have owned three cels from this sequence, they are all beautiful, but this may be the best of them all.  Both the Prince and Aurora's are eyes open, they are walking arm in arm, and they are gazing lovingly at each other!

To view this cel in the film, click on the short video below: