Original Production Animation Cels of Si And Am The Siamese Cats from "Lady And The Tramp," 1955 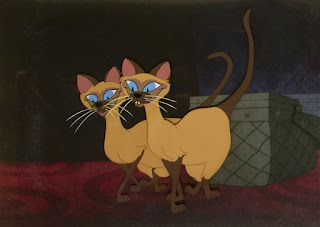 Si and Am account for a very large amount of Villain merchandise sold by Walt Disney Studios.  The cats were only in the film "Lady and the Tramp" for a very short amount of time; however their film time is very much remembered and loved.  With their names combined, "Siam" is the former name of the Kingdom of Thailand, referencing the cats' heritage.  Si and Am are a pair of identical twin seal-point Siamese cats and belong to Aunt Sarah.  Their physical appearance is sleek, with cream colored coats, angular wedge-shaped faces, and large blue almond eyes.  They have deep brown facial points with a darker, almost black muzzle with dark triangular ears; and their noses are black and small, and both have two middle incisors that hang over their lower lip.  Si and Am have dark brown "stockings" on their front legs and shorter "socks" on their hind legs, with dark long winding tails. 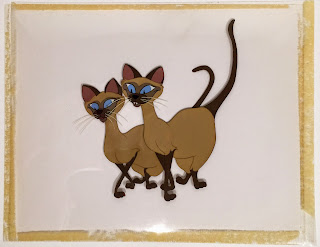 Cels without the background.

The famed Disney animator Milt Kahl did the final character design for Si and Am; but the cats were animated beautifully by Bob Carlson, Bill Justice, and John Sibley.  There is little doubt that a huge amount of the success of Si and Am goes to Peggy Lee and her performance of their signature song, "The Siamese Cat Song."  Peggy Lee was an American pop and jazz singer, songwriter, and actress who provided the original speaking and singing voices of not only Si and Am; but Darling and Peg.  She also composed the majority of the film's soundtrack with Sonny Burke; as well as performed "He's a Tramp", "La La Lu", "What Is a Baby?", and of course "The Siamese Cat Song"! 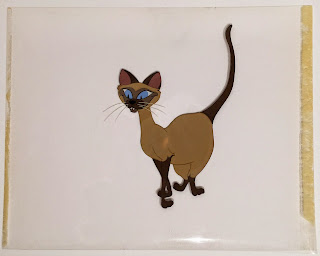 The cats storyline is that while Aunt Sarah is upstairs, Si and Am perform their trademark musical number, "The Siamese Cat Song".  During their song, the cats wreak havoc throughout the house, claiming it as their own, and even attempt to eat both the family fish and family bird!  During the closure of their song, Lady ferociously chases after them upon hearing of their intentions to sample some of the newborn baby's milk.  Lots of household damage ensues, and although the cats caused all the trouble, Si and Am feign injury in order to lay all the blame on Lady; who is then muzzled by Aunt Sarah. 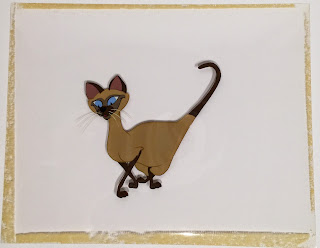 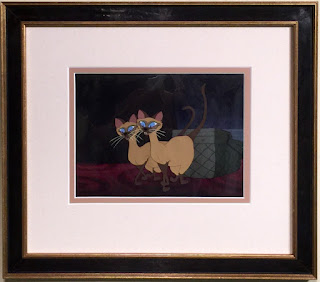 
Original production cels of Si and Am are extremely rare and this set is one of the finest I have ever seen in my 20+ years of collecting/dealing animation art.  I have only seen a handful of cels on the market and I have never seen any production drawings.  The cats famous quote is "We are Siamese if you please," and this pair of cels is from the very beginning of their famous song "The Siamese Cat Song," from which the line originates.  In this two cel setup both cats are full figure, with both blue eyes open, and have just emerged from their basket and begin to sing and wreck havoc!

To view the scene which these cels was used to create, click on the short video below: