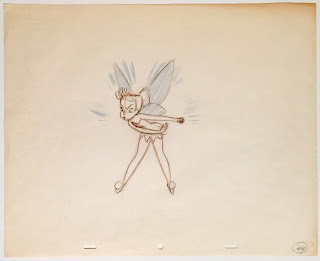 
To purchase this drawing or to visit the Art Gallery, CLICK HERE

The author J. M. Barrie first used Peter Pan as a character in a section of the adult novel "The Little White Bird" in 1902. He returned to that character with his stage play entitled "Peter Pan, or The Boy Who Wouldn't Grow Up," which premiered in London on December 27, 1904. The play ran until 1913, and it was later adapted by Walt Disney for the animated feature film entitled, "Peter Pan," in 1953.

Tinker Bell was designed and animated by Walt Disney veteran animator, Marc Davis (who supervised the animation and contributed to the design of: Cinderella, Alice, Wendy, Tinker Bell, Aurora, Maleficent, and Cruella De Vil). Without the aid of a vocal performance, he relied on Tinker Bell's facial and body expressions for the animation; taking inspiration from previous pantomime characters such as Mickey Mouse's dog Pluto and Dopey from "Snow White and the Seven Dwarfs." Once "Peter Pan" was released, Tinker Bell received critical acclaim and would continue to be one of Disney's trademark characters. She has become one of the main spokes-characters for The Walt Disney Company and one of its most popular and iconic characters since her creation. Many people remember the opening to the TV show "The Wonderful World of Disney," as Tinker Bell would fly towards the center of the screen with a thin wand in her hand, waving it, and causing fairy dust to fly out towards the viewer! 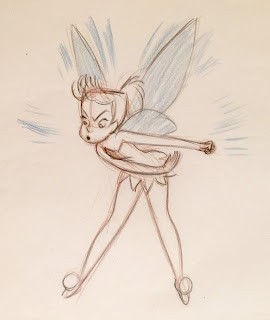 Close up of the original production animation drawing of Tinker Bell.

From veteran Walt Disney animator Andreas Deja:
"To me Tinker Bell is perfection. Her character arc in the story is very strong. Because of her affection for Peter Pan she is jealous of Wendy, which gets her into trouble. But toward the end of the film she saves Peter's life as well as the other kids. Her animation throughout is flawless. Occasionally based on live action reference, Marc animated her beautifully. She always feels like a small figure, but the acting has great range and subtlety. Marc said he really enjoyed the challenge of a mute character, where pantomime is the name of the game."

Because of the public's love of the character, DisneyToon Studios decided to create a series of films staring Tinker Bell; and the movies were extremely popular and very well received. The voices of Mae Whitman, Raven-Symoné, Lucy Liu, America Ferrera, Kristin Chenoweth and Pamela Adlon are featured in the series of films. Each of the first four films is set around one of the four seasons: "Tinker Bell," 2008 centered around Spring, "Tinker Bell and the Lost Treasure," 2009 around Autumn, "Tinker Bell and the Great Fairy Rescue," 2010 around Summer, and "Secret of the Wings," 2012 around Winter. A fifth title, "Pixie Hollow Games," 2011 was supposed to be based on all four seasons, but it was released before "Secret of the Wings" and the film was scaled down. A sixth film, entitled "The Pirate Fairy," was released on April 1, 2014, followed by the release of a seventh film "Tinker Bell and the Legend of the NeverBeast" on March 3, 2015. The film series was a spin-off of and prequel to the animated feature film "Peter Pan" and to its sequel, "Return to Never Land."

Close of the production number.

This is a wonderful original production animation drawing of Tinker Bell that was drawn by Disney Directing Animator Marc Davis in development of a scene in Walt Disney's animated feature "Peter Pan," 1953. The drawing is from the scene when a very jealous Tinker Bell, frustrated by Peter Pan's attention toward Wendy Darling, races ahead of the flying Darling children to rally the Lost Boys to shoot down the "terrible Wendy Bird." In five scenes in their underground home, Tinker Bell tells the boys she has "orders from Pan!" concerning "a terrible Wendy Bird" that is "flying this way" and they are to "shoot it down!" Tinker Bell is centered on the sheet, eyes and mouth open, and the drawing is accomplished in blue, brown, and graphite pencils. Original animation artwork of Tinker Bell from "Peter Pan," is very rare, and this is an exceptionally large full figured drawing filled with great energy and action. The dialog for this scene is below:


To see the drawing in the film, just click on the short video below: