Original Production Animation Drawing of Lady From "Lady and the Tramp," 1955 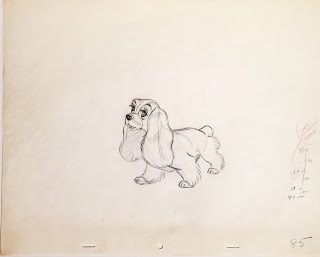 
To purchase this drawing or to visit the Art Gallery, CLICK HERE!

"Lady and the Tramp" (released on June 22, 1955) is a full length featured animated film produced by Walt Disney and released by Buena Vista Distribution. The film was the 15th in the Walt Disney Animated Classics series, and it was the first animated feature filmed in with the CinemaScope widescreen film process. The film was based on the story "Happy Dan, The Whistling Dog" by Ward Greene and tells the story of a female American Cocker Spaniel named Lady who lives with a refined, upper-middle-class family. Lady meets a male stray mutt named Tramp and they embark on many exciting and romantic adventures.

One evening in 1937, Disney storyman Joe Grant invited Walt Disney over to his house for dinner and ended up showed Disney a drawing he had made of his pet spinger spaniel, who was named Lady. Walt loved the drawing and suggested that Joe make a storyboard out of it; which he did and the plan was to create a new animated film, simply titled "Lady." The story that was pitched ended up being too simplistic to Walt Disney's taste, and the project was put on hold until about 20 years later.

Lady was wonderfully animated by the great Disney artist Ollie Johnston and she was voiced by Barbara Luddy. Barbara Luddy (1908 — 1979) was an American actress from Great Falls, Montana and she starred in silent pictures in the 1920s. She was also a prolific radio performer; known for her performances on the long running radio show "The First Nighter Program" which aired from 1936 until 1953.

However, Luddy is perhaps best remembered for her voice work in Walt Disney animated films; with her most memorable role being that of Lady from Lady and the Tramp.  She also performed in Sleeping Beauty (voice of Merryweather), One Hundred and One Dalmatians (voice of Rover), Robin Hood (voice of both Mother Church Mouse and the Mother Rabbit), and the Winnie-the-Pooh featurettes (Winnie the Pooh and the Honey Tree, Winnie the Pooh and the Blustery Day, and Winnie the Pooh and Tigger Too) all of which she provided the voice for Kanga. 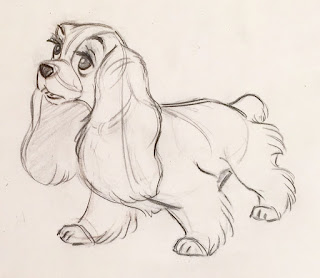 Close up of the original production animation drawing of Lady.

This drawing is from the scene that occurs after Jim Dear and Darling's baby arrives. Lady is alone in the kitchen, when she hears the baby crying upstairs. Lady walks out of the kitchen and pauses in the doorway, looks upward and wonders to herself, "What is a baby? I just can't understand." Walt Disney animator George Nicholas supervised the animation of Lady in this scene. Nicholas began his career as an animator for Walter Lantz and then around 1940 he joined the Walt Disney Studios. He worked on many projects for Disney, receiving screen credit for his work in Cinderella, Lady and the Tramp, and Sleeping Beauty.

Close up of the production number and the animation ladder.

This is an absolutely beautiful original production animation drawing of Lady. She is full figure, eyes and mouth open, centered on the animation peg hole paper sheet, and is five inches long. A large and  wonderful piece of vintage Walt Disney animation artwork.